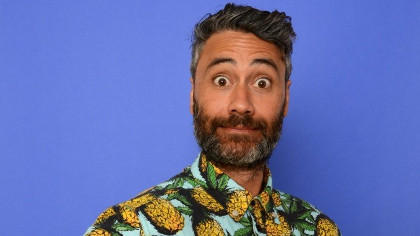 Hunt for the Wilderpeople took out seven categories at the 2017 New Zealand Film Awards including Best Film and Best Actor.

Taika Waititi is the son of a school teacher and an artist. Taka hails from Raukokore on the East Coast and grew up there and in Wellington, going to Onslow College in his teen years.

While his father is Māori, his mother is of Russian Jewish heritage and he has used her surname, Cohen, for some of his work in film and writing. Ambitions to be a painter or deep sea diver were side-lined after a high school drama teacher opened his eyes to acting.

Taika graduated from Victoria University in 1996 with a degree in theatre and film. After a string of film and television credits as well as comedy projects under his belt, he really hit his stride in 2003 with his short film, Two Cars, One Night, which eventually got nominated for an Academy Award for Best Live Action Short in 2005.

It won’t be a case of “big American block-busters only” from now on. Taika says he is still dedicated to telling Kiwi stories, making smaller films and “mixing it up”. His next project will be directing a stop-motion film about Michael Jackson’s pet chimp named Bubbles.

Taika Waititi is a writer, director, actor and visual artist. His contribution to Aotearoa spans many years as one of New Zealand’s pre-eminent story-tellers. His films’ evocative and unique expression of New Zealand’s culture and identity are acclaimed domestically and internationally.

His short and feature films have broken box-office records and garnered international acclaim at events such as the Sundance Film Festival and Academy Awards. Taika’s creative flair and distinctive storytelling has shown New Zealand’s unique cultural traits to millions of people.

The humble and easy-going natures of his characters resonate with New Zealand and international audiences. Combined with stunning visual cues of New Zealand life and landscapes, his films epitomise what makes New Zealand a truly special place to live.

Waititi participated in the 2015 Cure Kids charity single – raising funds for research into cures and treatments for conditions affecting children – and has shown support to charities fighting child poverty. He is helping raise awareness of the lack of Māori and Pacific Island bone marrow donors including registering himself as a donor.

In February 2017, Waititi won the award for New Zealander of the Year to which he says “feels amazing.” As well as making What We Do in the Shadows in 2014, Taika was on the writing team for Moana and directed Marvel’s latest offering, Thor, to be released in 2017.