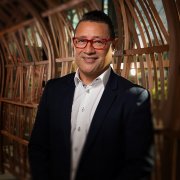 With a career spanning more than 20 years in mainstream broadcast media, Neil Waka is a seasoned broadcaster who, after leaving television, successfully transitioned into senior leadership in two global organisations.

Now with a successful corporate career under his belt, Neil was almost certain he would never return to broadcasting. However, he says the opportunity that arose with Māori Television to present and co-produce on Te Ao Tapatahi, a bi-lingual weekday morning news show, was too good to pass up, particularly at a time when he's looking to prioritise other personal goals like reconnecting with Te Ao Māori and Te Reo Māori.

It's busy times ahead for Neil as he juggles his responsibilities at Māori Television and Coca Cola Amatil, where he will continue in his role as head of corporate affairs. This change has also required a lot of support and buy-in from his whānau especially his greatest support, wife Tanya Waka, teacher and Head of Faculty at Auckland Girls Grammar School.

Neil says he sees this as an opportunity to bring his broadcasting and corporate experience to Māori media as it will be his first time working with Māori Television. He's always been passionate about Te Ao Māori and the importance of New Zealander's taking Maori pronounciation seriously and now he has an opportunity at Maori Television to learn te reo from some of the best so he might be able to fully converse in te reo Māori. It's something he says he's always wanted to do. Part of this challenge is driven by his son Ezrom and eldest daughter Breanna, 16, who are also passionate about te reo. He’s still working with his youngest daughter Kiara, 14, on that journey, he says with a smile.

Neil will be presenting  Te Ao Tapatahi, which literally means to unite and is taken from the well-known Māori song, Tūtira Mai Ngā Iwi Wednesday to Friday mornings as well as co-producing each show.