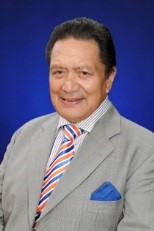 Professor William Te Rangiua (Pou) Temara was made a Companion of the New Zealand Order of Merit for services to Māori and education in the Queen’s Birthday Honours in 2016.

A lecturer for Te Panekiretanga o Te Reo Māori and through his academic leadership as a professor at the University of Waikato, he adds to an already immense personal contribution to the survival of the Māori language. In short, his contribution to New Zealand in this arena is unparalleled.

Born in Ruatāhuna in 1948, Professor Pou Temara was the eldest grandchild and, in keeping with Tūhoe traditions, was raised by his grandparents, Tamahou Tinimene and Pareraututu, then later by his great uncle, Hikawera Te Kurapa.

From an early age, his formal schooling in the ancient rituals of Tūhoe began in earnest. Dr Temara completed his primary education at Huiarau Māori School in Ruatāhuna, then moved to Paerata to attend boarding school at Wesley College.

Moving to Wellington, he begin a long-term association with tertiary education – firstly at Wellington College of Education where he received a Teachers College Diploma in 1977 followed by a Māori Language Teachers Certificate in 1980 and later at Victoria University where he completed a Master of Arts with distinction in 1991.

Before beginning post-graduate studies, he joined Victoria University staff in 1986 as a senior lecturer. Here he taught Māori language, knowledge and culture for 16 years.

In 2003, he could no longer resist the pull of his iwi and home, returning to Mātaatua to take up briefly the position of Associate Professor and Head of Faculty, Mātauranga Māori, at Te Whare Wānanga o Awanuiārangi before accepting a Professorship at The University of Waikato where he currently resides.

Pou Temara has excelled academically. As a student, his Master’s thesis, titled ‘Te Ahua o Te Kupu Whakaari, The Nature of Prophetic Sayings’, is still considered the benchmark for a thesis written in Māori.

His thesis – supervised by distinguished Professor Sir Sidney Mead (Hirini Moko) – received the highest grade and was awarded a Distinction. This thesis is widely used as a template for students who wish to write academically in te reo Māori.

His scholarship as a writer is evident in the many publications he has completed, from exerts in Ngā Tangata Taumata through to the completion of The Dictionary of New Zealand Biography.

Professor Temara is a recognised tohunga and a leader in Māori language, ancient karakia, kapa haka and whaikōrero. Using traditional karakia, he has performed many opening ceremonies for new buildings, composed many items that have won national titles in kapa haka, and his specialist esoteric skills are constantly called upon.

He supports Te Papa Tongarewa as a tohunga and leader in the delicate repatriation of Māori human remains from around the world.

He was appointed to the Waitangi Tribunal in 2008, is a director of the Māori unit for Radio New Zealand and appears in many Waka Huia series as an expert commentator on historical affairs.

He was instrumental in the creation of the first Māori language series screened on Television New Zealand in 1982, appearing as the presenter for Kōrero Mai.