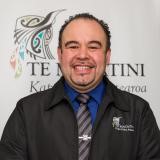 Paraone originally came up with the idea as something of a social experiment to see if he could speak te reo Māori for an entire month.

In 2016, the Mahuru Māori initiative was incorporated into the Māori language strategy of Te Wananga o Aotearoa, known as Reo Ora.

The chief executive of the wānanga, Dr Jim Mather, supported the initiative and encouraged the organisation’s 1,500 staff and 32,000 students to participate.

He personally took up the challenge to speak Māori at least one day per week of September.

Paraone also spearheaded a Te Wānanga o Aotearoa roadshow which challenged the belief that Matariki is a grouping of seven stars.

In 2016, he visited five Te Wānanga o Aotearoa sites around the North Island where he presented a mobile movie experience to re-educate New Zealanders about Matariki – and to challenge long-held beliefs about the cluster.

Paraone Gloyne plans to propel the Mahuru Māori movement from strength to strength in 2017 and beyond.

The Māori language initiative sees participants speak only in te reo Māori during the month of September (Mahuru). It challenges people on social media around the world to speak Māori for a day, a week or for the entire month of September.

There are three levels for those who want to take participate in Mahuru Māori. Level one is for those who commit to speaking Māori for one day a week for the month of September or more than one day.

Level two is for those who undertake to speak Māori for a week of September. Level three is for participants who commit to speaking Māori for the entire month.

Each person who participates in this initiative via Facebook receives resources that prepare them for the challenges that arise when speaking Māori in both a Māori and a non-Māori speaking environment.

In 2016, Paraone was also involved in a roadshow called Te Iwa o Matariki. It was free to the community and an opportunity for the public to engage with traditional kōrero about Matariki and the theories around the stars.

“We can show you that there are actually nine stars in Matariki – not seven – according to Māori custom and tradition.

“Each of these stars has great significance for te ao Māori so it is unfortunate that the beliefs of other cultures have been allowed to permeate our own.”

Paraone says the presentation is a “rediscovery of the old” and is vital in maintaining traditional Māori knowledge that could otherwise be lost.

He says it’s a reminder that there is a lot of mātauranga Māori out there yet to be re-discovered and re-learned.

“This ‘new old-knowledge’ around Matariki challenges our perception pushing us to consider the deeper meaning of Matariki and its importance.”