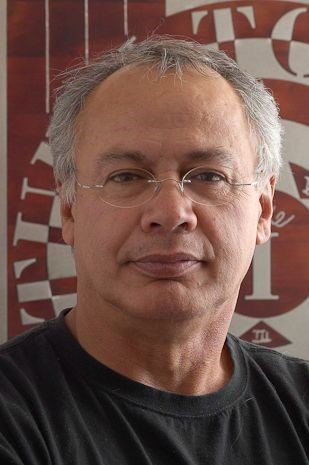 A Professor of Māori Visual Arts at Massey University’s Whiti o Rehua School of Art, Professor Robert (Bob) Jahnke was made an Officer of the New Zealand Order of Merit for services to Māori art and education in the 2016 Honours list.

Considered one of New Zealand’s leading contemporary Māori artists, Professor Jahnke is a highly respected educator who works as an historian, teacher, researcher, writer and advocate for Māori and indigenous arts nationally and internationally.

His artistic practice straddles design, illustration, animation and sculpture and he works with a range of media including found objects, steel and lead.

Of Samoan-German-Irish-Māori heritage, Professor Jahnke’s work is typically based on political issues that face Māori people, the relationship between Māori and European colonisers and the impact of Christianity on Maori culture.

Professor Jahnke grew up on the East Coast at Waipiro Bay and was educated at Hato Paora College.

He then headed to the California Institute of the Arts where he graduated with a Master of Fine Arts in Experimental Animation.

Returning to New Zealand, he taught in Hastings, Rotorua and Auckland before shifting to Palmerston North to join the staff of Massey University.

While a lecturer, he studied for and earned his PhD and, in 1991, set up the Bachelor of Māori Visual Arts Programme, Te Putahi-a-Toi, which he has subsequently coordinated.

In addition to training in the arts, the progamme includes Te Reo Māori and Tikanga āaori.

Through his position at Te Putahi-a-Toi, Professor Jahnke influences the next generation of Māori artists which he says is imperative.

“Because I am Māori first and foremost, I see my role as an educator as far more important for Māori culture than my role as an artist … for me, personally, this commitment is a cultural obligation.”

His work focuses on the dynamics of inter-cultural exchange and the politics of identity.

Professor Jahnke is the current chair of Matakura – the collective of Māori art educationalists, writers, critics, historians and curators.

A former member of Te Waka Toi, he was intimately involved in the complex work leading to the launch of the Toi Iho trademark in 2002.

He has demonstrated his commitment to Toi Iho since that time by remaining on the trust after Creative New Zealand removed funding and agreed to hand over Toi Iho to an independent group representing Māori.

To this day, he continues to hold the trademark in place as an icon for high quality Māori artists and their art.

His work has been exhibited widely and is included in both public and private collections.