Our mission is to join the dots, drill down behind the soundbite and lift the level of debate. It’s all about challenging and increasing understanding. I’ve kicked my imposter syndrome to the kerb and getting stuck in. 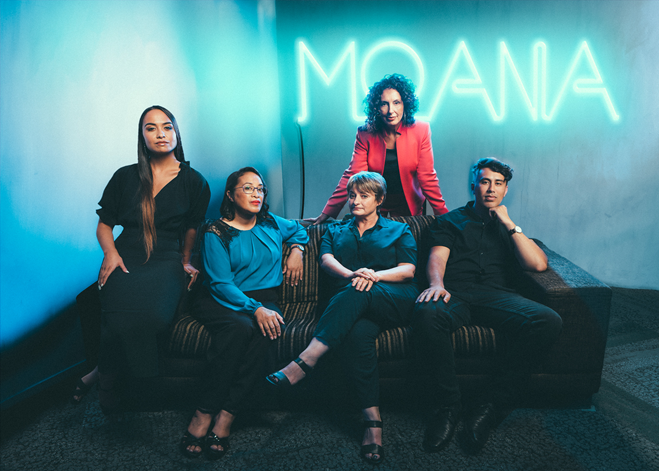 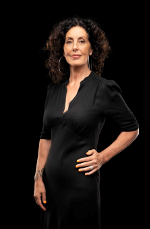 An award-winning recording and performing artist, Moana presented and co-produced the 20-episode pilot of the current affairs series that bears her name.

For the last 20 years, Moana has been co-directing documentaries for television and digital platforms with her partner Toby Mills, including Guarding the Family Silver, The Russians are Coming and the recent series The Negotiators. Moana will direct another series of The Negotiators this year.

They co-produced Conversations, a web-series with E-Tangata that screened through the NZ Herald. A trustee of Mana Trust (which produces the weekly E-Tangata), her profile and ability to translate complex issues into plain language, helps to inform both her writing and her onscreen presence.

An in-demand keynote speaker, Moana brings significant networks across all sectors, including reach into indigenous communities globally. Moana will continue in her role as Associate Producer, researching and interviewing community, business and political leaders. In 2020, she will also release four new music videos from her upcoming album ONO, collaborations with international indigenous female artists.

Moana kicks off February by performing at Splore as TŪ, alongside her musical collaborator Paddy Free, who wrote the music for the new opening titles. 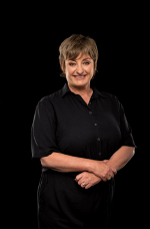 Award winning reporter Sarah Hall is described as “fearless” by her contemporaries and has been a journalist for more than 30 years, working in radio, digital and television.

Her previous radio roles included working on stations such as Radio New Zealand, Mai FM and the IRN network.

A political reporter at TV3, Chief of Staff (Auckland Newsroom) and reporter for 3 Degree, 3D and Sixty Minutes, Sarah is well known for her hard-hitting investigations including the death of Sarah Carter in a Thai hotel and the murder of Fielding farmer Scott Guy. She took home ‘Best Current Affairs Reporting’ at the 2008 Qantas Television Awards for her investigation into New Zealand’s first case of suicide for sale.

Most recently a freelance producer of TVNZ News, Sarah brings significant experience and mentoring capability to the team as both a Producer and reporter. 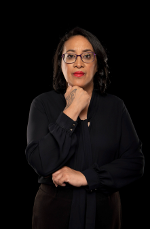 An award-winning journalist and communications consultant, Iulia began her media career in 1987 with Pacific TV show ‘Tagata Pasifika’. In 2001 Iulia helped launch the Pacific Islands Media Association before becoming a founding member of Māori Television in 2003.

She later became Head of News and Digital Content at Pacific Media Network and a journalist for Māori Television’s award-winning current affairs show ‘Native Affairs’. Iulia won two major awards at the 2018 Ngā Kupu Ora Awards. Her success was due to a 2017 investigation into the treatment of children in state care.

Iulia has worked extensively with Māori and Pacific communities in New Zealand and the Pacific region. She’s also a creative entrepreneur and owns the cultural communications company ‘Brown Pages’. For the past 15 years, Iulia has worked for her iwi as secretary and communications adviser for the Ngāti Hāua Iwi Trust.

Her mission is to break down stereotypes about Māori, uncover injustices and celebrate Māori success. In 2020, Iulia moves from being a freelance reporter for the current affairs series to an integral part of the small full time team. 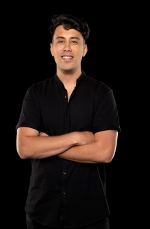 A reporter, director and presenter for Pango Productions for the past 4 years, Hiku started as a researcher for the political satire show Brown Eye.

A sought after young reporter, during his time at Marae, Hiku produced and directed over 100 current affairs stories including an exclusive interview with Taika Waititi in Los Angeles (which hit the headlines internationally), Willie Apiata’s first interview in 10 years (where he opened up about having mental illness) and the first major interview with league star Kalyn Ponga. He also introduced the world to William Wairua in the first Marae story to break one million views.

Hikurangi was a finalist for Māori Affairs Reporter of the Year at the 2018 Voyager Media Awards and winner of Entertainment, Arts and Lifestyle Reporter Award - the only Māori reporter to pick up a major award in a general category.

Hiku directed and story produced for the award-winning Piri’s Tiki Tour and Sidewalk Karaoke. He co-produced the upcoming Haka series and was an advisor on The Negotiators, both through Tawera Productions for Māori Television.

He joins his mother Moana on Te Ao with Moana. 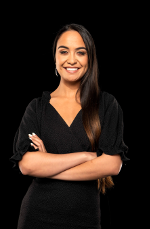 With a Bachelor of Arts degree majoring in politics and Māori (University of Auckland) and only recently, graduating with a Masters in Māori broadcasting with first class honours (Waikato University), Kimi’s passion is telling Māori stories from a distinctly Māori perspective.

Kimiora has five years of experience under her belt, working inside the Māori Television newsroom as a translator, online news presenter and Te Kāea/online reporter.

Over the past year, she has been directing for Waka Huia, a learning experience that has helped set Kimi up to craft documentaries. Over this summer, she will be directing Whitiki, her first hour long documentary for Māori Television’s 2020 signature ANZAC coverage.

With her love of story-telling, youthful enthusiasm and excellent te reo Māori skills, Kimi will share not only her own insights and prowess in the language, but committed to becoming an exciting new reporter in the current affairs space.