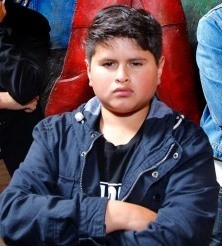 The publication says Dennison ‘[stole] the show’ from veteran actor Sam Neill in his performance on Taika Waititi's runaway hit Hunt for the Wilderpeople.

Hunt for the Wilderpeople took out seven categories at the 2017 New Zealand Film Awards including Best Film and Best Actor for Julian.

In 2013, then aged 11, Julian was cast in his first feature film, Shopping. The open auditions were held at his primary school and it came down to him or his twin brother Christian.

But Julian wasn’t sure he wanted to do it, his mother Mabelle says.

“Julian was a quiet and shy child – he found it tough being away from his family. But he’s learned to overcome that and he’s blossomed.”

Making the film Shopping proved to be the right move for Julian as he won the New Zealand Film Award for Best Supporting Actor.

Not long after, Dennison was cast in the 2015 Australian film Paper Planes and it was his performance as Kevin that caught the eye of acclaimed director Taika Waititi.

Taika first directed the youngster in an anti-drug driving advert, Blazed. That was only to be the beginning of their working relationship – the best was yet to come.

Taika then cast Julian – without an audition – in the lead role in Hunt for the Wilderpeople. “I was like, ‘Yeah, I am keen, I’d really enjoy it’,” says Julian. “I never knew it would be this big.”

Julian now finds himself being recognised on the street and has to deal with the ‘fan-girl’ thing.

But despite his new-found fame, he is not the teacher’s pet at Hutt International Boys School and gets no special treatment – and he’s grateful for that.

Julian’s rise to fame hasn’t gone to his head especially when your classmates “take the miki out of me all the time – you didn’t come in your limo today”.

He attributes his level head to his friends, school mates and whānau for being “really supportive of me”.

There are no real life antics like his character, Ricky Baker, in Hunt for the Wilderpeople.

“I don’t tag and stuff like that, he’s definitely a bad egg. He’s very different from my life … I have a big family and he’s a foster kid. He’s into gangster rap music, I’m into Coldplay and pop.”

When asked if he wants to be in big Hollywood movie, Julian’s reply is cool and collected.

He might be a movie star but Julian admits he’s a “horrible” cook.