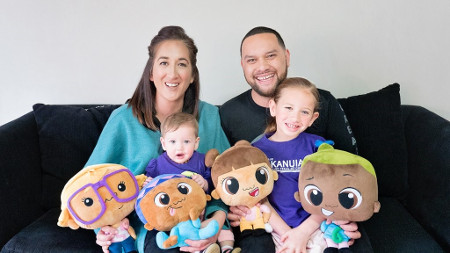 Many Māori speaking families have despaired over a lack of Māori resources for their kids. A Māori family dedicated to the Māori language, Hōhepa Tuahine and Kristin Ross did not grow up with the Māori language as children but instead learnt at university.

They decided that they would only speak Māori to their children so that the Māori language was natural to them but what they didn't consider was the lack of products to support their decision. In 2016, in a world-first, the couple launched the world's first line of Māori speaking dolls for children – Pipi Mā – and their first line of merchandise called the Kōrero range. The dolls went on sale on 8 November 2016 and sold out within 36 hours.

Hōhepa Tuahine – BA, BA (Hons), MA (First Class Hons), PhD Candidate, Te Panekiretanga o Te Reo Māori – was born in the Waikato where he spent much of his early years before moving to Tāneatua. After attending his first year of kura in Tūhoe, Hōhepa and his family moved home to Rotorua where he was raised until young adulthood.

The couple is dedicated to providing high quality resources and products for the language to ensure they are relevant and necessary in a bid to normalise and make the Māori language cool. They are motivated by their children – they are the drivers of their innovation and the catalyst to all new ideas that they produce.

The couple established Punarau Media in 2014 – a multi-media production company based in Rotorua dedicated to producing high quality Māori language digital media and content. They manage projects of all scales ranging from web series to iOS and Android apps as well as audio engineering.

The company name represents their passion to constantly innovate new ideas for the Māori language.  Puna is a spring, and rau refers to hundreds. They are a multi-media production company with no limits or restrictions on a mission to produce hundreds of high quality media resources for their people and their language.

In order to normalise the Māori language, they believe their children need opportunities to see their language and culture everywhere so it is not merely confined to the classroom or marae. They came up with the idea for Pipi Mā in 2010 in a bid to provide their tamariki with a reflection of themselves in the dolls and commenced research and development in 2013.

In 2015, Kristin's Masters focusing on Pakiwaituhi Māori and Pipi Mā was published and – in the same year – the Pipi Mā trademark was registered under Punarau Media Limited. Pipi Mā strengthens language use and skills by prompting conversation with their specially designed questions. Most importantly, Pipi Mā raises the status of the language in homes and communities by blending classic elements of pop culture with the Māori language.

There are four different dolls: four-year-old Hura, three-year-olds Pipi and Tītoki, and one-year-old Pītau Pōtiki. Each doll has its own set of phrases it recites when the hand is squeezed and they all sing their own song in Māori. Pipi Mā makes the Māori language cool by imbedding the idea into our children that te reo Māori is awesome and that Pipi Mā is as cool as the likes of Dora the Explorer and Doc McStuffins. Pipi Mā takes the best of pop culture and carries the status of te reo Māori into the same domain as its Nickelodeon or Disney counterparts.

In 2017, the couple will launch a second line of dolls called the Mihi Range as well as the Pipi Mā web series and a more extensive range of merchandise.