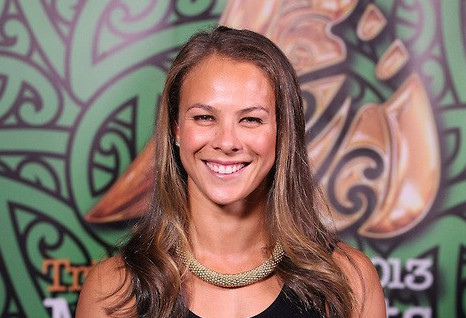 Lisa Carrington was named Sportswoman of the Year at the 2016 Halberg Awards before claiming the supreme Halberg Award.

At the Rio Olympics, Lisa took gold in the K1 200m and bronze in the K1 500m, becoming the first New Zealand female to claim multiple medals at an Olympics.

She was then selected as the flag bearer at the closing ceremony.

Lisa Carrington was born in Tauranga on 23 June 1989. When she was eight, Lisa’s family moved to Ohope Beach – a small town near Whakatāne in the Bay of Plenty.

Lisa attended Whakatāne High School and then went onto Massey University in Albany.

She first started paddling as a surf lifesaver and has represented New Zealand in that sport too.

In 2007, the 17-year-old represented New Zealand in single (K-1) and double kayaking (K-2) at the Australian Youth Olympic Festival.

She has been unstoppable over the 200m distance since 2011, winning four consecutive world championship titles and dominating the world cup circuit.

Coached by Gordon Walker, Lisa is now based on Auckland's North Shore and is studying for a graduate diploma in psychology after already earning a Bachelor of Arts.

She was became a Member of the New Zealand Order of Merit in the 2013 New Year Honours for her services to kayaking. She is also the only kayaker, female or male, to win world championship medals in both K1 events every year since the 2012 London Games.