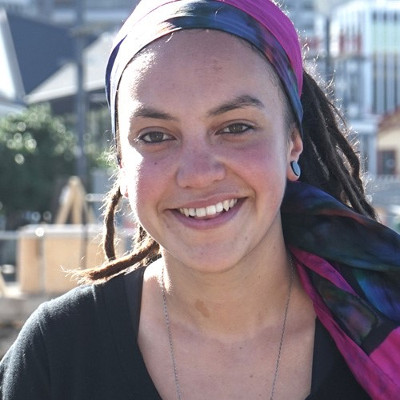 No-nonsense rebel with a cause Laura O’Connell Rapira is a grassroots innovator and the new face of activism in 2016.

As a founding team member and Director of Campaigns at ActionStation, Laura has helped build a digital community of more than 140,000 like-minded members to participate in campaigns designed to drive a fairer, more just and sustainable Aotearoa – New Zealand.

ActionStation’s job is to connect people so that their voice has more impact and power to hold political and corporate interests to account.

“We need to dream big ‘cause the future is ours to create.”

Laura O’Connell Rapira took part in the Live the Dream programme for young social entrepreneurs, graduating in early 2014. She focused on developing and testing ideas to mobilise the power of the crowd to create change – from feeding the masses to fundraising for causes.

Shortly after, Laura was offered her dream job at ActionStation. ActionStation is a vehicle for people of all backgrounds to unite independently of party policies, special interests and the usual labels that divide people.

They act together, in new ways and real time, to create what they cannot achieve on our own: a society, economy and democracy that serves us – everyday people and the planet we love.

Laura spent five years in Canada and the United Kingdom as a charity fundraiser and also worked on the festival circuit with Glastonbury and the Secret Garden Party. Her experience overseas inspired her next move.

Laura was concerned with the low voter turn-out amongst young people. So she utilised her learning to co-found RockEnrol – a youth-led volunteer-run organisation dedicated to building and activating political power for young people through grassroots community organising and popular culture.

In the lead-up to the election, Kiwi musicians were enlisted to put on gigs. To attend the gigs, people had to be registered to vote – an idea that helped to engage thousands of young people.

“We launched in 2014 where we successfully helped increase the youth vote – 18 to 30-year-olds – by 3.4 per cent (according to independent polling from Horizon Research). The overall vote increased by seven per cent from 42 per cent to 49 per cent.”

Laura’s mission is clear. “I believe in putting everyday people and our precious planet first … and building a society and economy that truly serves that vision.” She’s passionate about unleashing the power of people through digital and community organising, effective collaboration and values-based communications.

Laura is a creative campaigner, crowd-funding enthusiast and planner of parties with purpose. She says if you don’t feel represented by those in power, it’s important to remember that you’re not alone. But you need to talk about it.

“I believe in almost everything, including you, and secretly, I am still waiting for my letter from Hogwarts to arrive. My goal is to see a world where everyone has access to food, safe water, shelter, income, education and a life that is free from violence. I believe this goal is possible but only if we work together.”