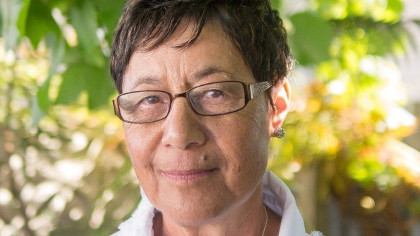 The principal and visionary of St Joseph’s Māori Girls’ College in Napier was a recipient of an award acknowledging her exceptional services to Māori and education in 2016.

Dame Georgina Kingi – a teacher at the school since 1969 and principal since 1987 – became a Dame Companion of the New Zealand Order of Merit.

The honour recognises her decades of work championing quality education and the teaching of Māori language and culture at the college in a career spanning nearly 50 years.

Under her leadership, ‘Miss Kingi’ has seen generations of smart, confident, young Māori women through the school's doors but she is not expecting the dame-hood will change how she is known in the St Joseph's community.

Many of them credit her for being an influential figure when it came to their success; some of her past students include the likes of Whirimako Black, Moana Maniapoto and Hinewehi Mohi.

"I would be very surprised if there was a change in title especially with the past pupils and whānau," she said. "I think it will business as usual and 'Miss' as usual."

In 1993, Dame Georgina was awarded the New Zealand Suffrage Centennial Medal and – in 2004 – a Companion of the Queen’s Service Order for Public Services.

Raised in Poroporo, near Whakatāne, Dame Georgina attended St Joseph's herself before studying at Auckland University and returning to the school, initially as a Māori language teacher.

"Because of my belief in the value of Māori girls' education in the holistic environment of a Māori boarding school, I have remained.”

A state integrated Catholic school for Years 7 to 13, St Joseph’s is one of the country's oldest Māori boarding schools and the only remaining Māori girls’ boarding school in New Zealand. The school is unique in that it is the only specifically Catholic Māori school for girls in the world.

"The mission statement of St Joseph's has always been to produce young women who are confident in their ao Māori and confident in ao Pākehā. St Joseph's, I believe, does this through the support and high expectations of its whānau and creditable academic success within an environment underpinned by Māori and Catholic values."

As well as taking on a range of regional and national roles covering education, culture and religion over the years, Dame Georgina has also been heavily involved with St Joseph's senior kapa haka which has performed nationally and internationally. She led the planning for the national Manu Kōrero speech competition and was a member of the Education Expert Panel for the Prime Minister’s Education Excellence Awards in 2014.

She is also an honorary member of the Rotary Club of Taradale which has been involved in several partnerships with St Joseph’s. In collaboration with the Hawke’s Bay Regional Council, Dame Georgina arranged for her students to visit a Hawke’s Bay’s sister city in China in a mutual cultural exchange.