Are you stuck in a rut when it comes to the kitchen?  Perhaps you’d like to expand your culinary horizons…

Māori Television’s latest cooking show, JOE’S WORLD ON A PLATE, is set to inject new life into meals at your place starting this Sunday, January 13 at 7.00pm.

Tune in to see executive chef Joe McLeod (Ngai Tuhoe), who worked in top restaurants all over the world before returning to New Zealand, as he prepares his best international recipes using local ingredients.

Each week, a new entree, main and dessert will be on the menu.  And for those who are up to the challenge, JOE’S WORLD ON A PLATE will show viewers how to prepare and present dishes such as goose from Alaska, snake from Papua New Guinea and pickled pork from Germany.

JOE’S WORLD ON A PLATE is produced by Reuben Collier and Jo Santamaria of Rotorua’s Maui Productions – which also produces the successful food show, Kai Time on the Road for Māori Television.

Like Kai Time on the Road, JOE’S WORLD ON A PLATE is a 50 per cent Māori language series that is accessible for everyone.

Tune in to Māori Television on Sundays at 7.00pm to watch Joe show you his world on a plate. 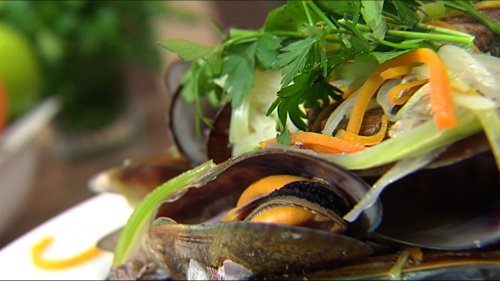