They’ll be supported by Māori Television’s young guns in the lead up across multiple platforms.

“Our newsroom reflects critical young voters.  They’re smart and award winning.  Who better to drive a new style of coverage and question their future than them,” said Head of News and Current Affairs, Maramena Roderick.

ELECTION AOTEAROA’s engaging approach includes a fresh take on promotions and special online excerpts with ‘Your Voice, Your Vote’ presenting a young point of view on the parties and candidates.

To further youth engagement, all Māori Television’s debates are moving out of studio to live student audiences.

ELECTION AOTEAROA launches its first leadership debate from Manukau Institute of Technology on August 22 at 8pm on Māori Television.  Candidates from all the Māori seats have confirmed attendance and will go head to head in debates from Victoria and Waikato Universities.  The debates will be livestreamed on both Māori Television and stuff.co.nz websites.

Throughout coverage, Māori Television will turn an acute lens on the Māori seats and their candidates.  It is the only network polling the Māori electorates.

“We must tackle the tough issues but our added point of difference is daring to have a bit of fun.  Even our graphics have been modernised and reinvigorated,” said Roderick.

On election night September 23, Māori Television will broadcast live from 7pm.  Anchors Oriini Kaipara, Matai Smith and Heta Gardiner will be crossing to multiple reporters and crew across the country.

In studio, our expert panel of Dame Tariana and Sir Mark will be joined by seasoned broadcasters to dissect the incoming results.  A second studio youth panel with anchor Kawe Roes will canvass social media and whether young New Zealanders actually made a difference.

A Post-Election special will air Sunday 24th September from 8am featuring the winners and a sweep of what went right or wrong.

Election Aotearoa premieres on Tuesday 22nd August at 8pm and is available globally to view through www.maoritelevision.com and www.stuff.co.nz

The live election night coverage and post-election special will also be simulcast through the Māori Iwi Radio network – check www.irirangi.net for the nearest station in your area. 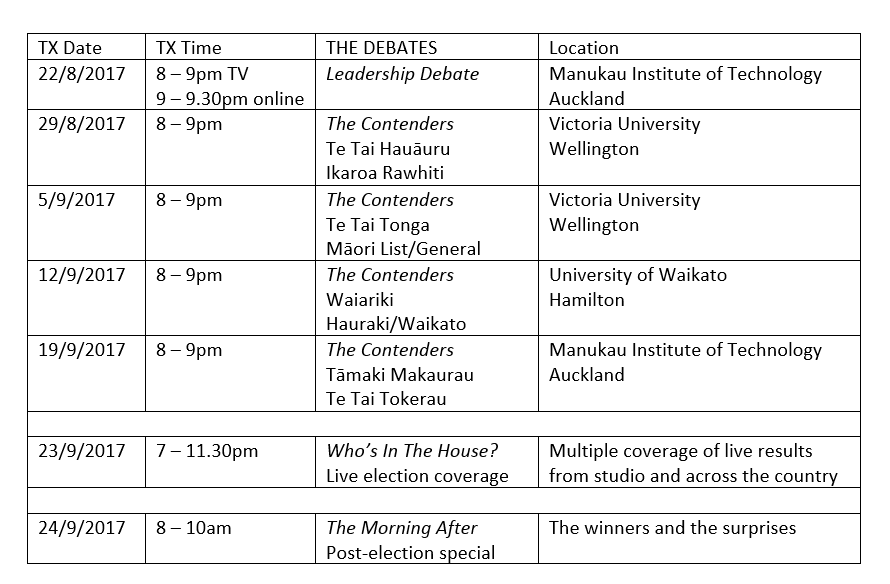